I can already hear the sighs of many salty Gunnery Sergeants- “The Eagle, Globe, and Anchor is the only emblem we need.”  Cool story but the truth is Marines have been earning, and therefore wearing, several different badges from the Army and Navy for a very long time.  So why does this symbol of infantry excellence get overlooked by the Corps? After an honest look at what the Army requires of those who earn an Air Assault badge compared to what most Marines in the infantry are trained and tasked with, it is odd that the Corps does not recognize this badge or see its place among Marines.

The most recognizable Army badge to be worn by Marines is, without question, the Army’s basic parachutist wings, frequently referred to as “jump wings” or “Airborne.”  They are earned by completing the Army’s three week “Jump School” at Fort Benning, GA. Most Marines who attend this need to do so as part of their MOS in Reconnaissance, MARSOC, Air Delivery, and of course Parachute Riggers; all of whom aspire to later rate to wear the coveted gold wings or ‘Naval Parachutist wings’. And it is worth mentioning that there are many Marines who get to attend “jump school” as a bonus and will earn the right to wear the badge even though they will never in their Marine Corps career be required to parachute.

Of course, there are several other badges worn by Marines that are a clear statement of their unique training and job within the Marine Corps. Explosive Ordnance Disposal (EOD), Combat Divers, Air Crew, and of course Crew Chiefs all rate a badge that sets them apart.

THE TEN TOUGHEST DAYS IN THE ARMY?

Now, let’s talk about Air Assault. Simply put, this is the way infantry units describe the doctrine of conducting operations from aircraft- primarily helicopters. The Army’s Air Assault school is a 10-day course affectionately known as the “10 toughest days in the Army”. The original school was appropriately established at Fort Campbell, KY which is home to the Army’s most recognizable “Air Assault” force, the 101’st Airborne Division “The Screaming Eagles.”  Today the Army operates several Air Assault schools throughout bases that are home to other infantry divisions and special operations forces. (The Army’s 10th Mountain Division, which resides at Fort Drum, NY, recently boasted it pins on more Air Assault badges than any other school or unit.)

So, what does it take to earn this and why should Marines care? The 10-day course comes down to 3 phases- all of which include constant physical demands that are consistent with infantry training such as ruck runs, obstacle course, and a 12-mile ruck march.

The three phases are: 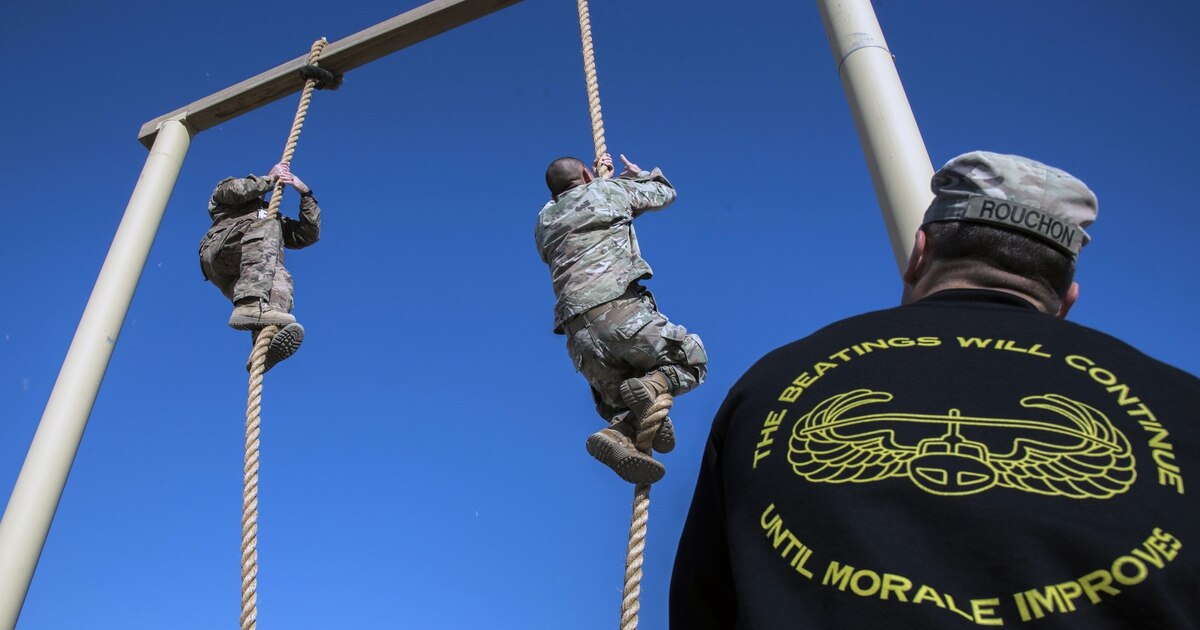 Marines fast roping from a CH-53E on to a flight deck.

Truth is- any Marine Infantry unit during pre-deployment training will have gone through everything that is covered by the Army at Air Assault School. Any Marine Rifle company designated as the helicopter or boat raid company will have most likely taken that training several steps further, not to mention the handful of Marines who attend the course on Helicopter, Rope, and Suspension Technique (HRST).

The Marine Corps has always leaned toward the term “Helo Assault” vs Air Assault. Fact of the matter is that this type of operation is one the Marine Corps has been doing since the Korean War and to this day  does it very well. It is an essential part of how Marines operate and arguably the cornerstone of a Marine Expeditionary Unit. The Marines are highly focused on returning to their naval expeditionary doctrine right now and with that is a huge emphasis on the ability to move Marines from ship to shore by air. The Corps continues to expand its V-22 Osprey inventory as well as invest in the next generation of CH-53 Sea Stallion helicopters.

THE QUESTION OF MORALE

The Marine Corps infantry is facing an uphill battle when it comes to retention. For Marines who have excelled at the infantry life and want to stay in uniform, there is the allure of special operation units within the Marine Corps and for some time now, infantry Marines have found success crossing over to the Army and becoming part of Airborne and Ranger units. Speaking recently with a senior officer within 1st Marine Regiment, there is a lot of conversation on how the Marine Corps can give visible distinction to the infantry in way that would boost morale and unit pride.

Badge or no badge, Marine infantry units will continue to train and perform helo/air assault operations and they will do so with excellence. As the Corps is asking it’s infantry units and those who are in direct support of them to showcase their roles and responsibilities as a special operations capable force, perhaps it is time to give them a token to display their identity as the tip of the spear.

4 thoughts on “Should the Marine Corps adopt the Air Assault Badge?”

There’s Always Enough Money For War, But Never For The Warfighter

The War Story That Deserves to be a Movie: Korean Edition

No Active Shooter in Fort Hood, Soldier Arrested for Threats

The Road to Mammoth: Getting Good DOPE pt. 1