Earlier this month, the US Military marked 25 years since one of the most successful Tactical Recoveries of Aircraft and Personnel (TRAP). The ultimate success was the recovery of Air Force Capt. Scott O’Grady, but also the success of a joint service operation and the validation of doctrine knows as “TRAP.”

As the Cold War with the former Soviet Union came to an end in the early 1990’s, many nations that had been under the iron fist of communism were now fragmented, and in some cases, embroiled in civil war. Nowhere was this a more brutal reality than in the former Yugoslavia. The “Bosnian War,” as it is remembered, was a horrific conflict in the areas defined as Bosnia and Herzegovina.

A war mainly between Bosnian Serbs and the Bosniak minority would result in the first genocide since World War II. An estimated 101,000 Bosniaks were exterminated as a result of a brutal campaign of “ethnic cleansing” that included many war crimes, such as rape and mass executions. This Bosnian war, which began in April 1992, was largely overshadowed by Operation Desert Storm and later, conflicts in Somalia and Haiti. By 1993, under tremendous pressure from other NATO member states, the Unites States committed military units to Operation Deny Flight.

The operation, which was meant to enforce a no-fly zone over the contested area, also tracked military movement and supply routes. It was a joint operation of all of NATO’s Air Forces and Maritime-based aviation units. As a countermeasure, the US Navy and Marine Corps began focusing specific units for potential “TRAP” missions.

On June 2, 1995, US Air Force Capt. Scott O’Grady was one of two F-16 fighter jets patrolling the skies over Bosnia. This was a routine mission for the 555th Fighter Squadron based out of Aviano, Italy. Everything changed within seconds after O’Grady’s controls detected a surface-to-air missile locked on to his aircraft. This was the first of two launches by Bosnian Serb forces. The first missile was unsuccessful, but the second struck the F-16 causing O’Grady to eject the aircraft. At the time, the pilot of the other F-16, Capt. Bob Wright, could not verify he saw O’Grady eject, leaving O’Grady’s fate unknown.

Without any additional support or knowledge of O’Grady’s status, Wright returned to Aviano. Meanwhile, O’Grady managed to parachute safely to the ground. He immediately realized he was deep inside Serb territory, Serb forces had located his parachute, and made a number of attempts to capture him. O’Grady would use every bit of his Survive Evade Resist Escape (SERE) training to avoid capture or death.

The US Military performed constant reconnaissance from the air and monitored communications. The chatter among Serb forces was unclear, but encouraging, that O’Grady had been seen alive and may have evaded capture thus far.

Six days into O’Grady’s ordeal, another F-16 from the 555th flew over the likely areas where O’Grady may be. The pilot kept repeating O’Grady’s call sign, Basher 52, into the radio. After repeated calls, on June 8, the answer came- “Basher 52, Basher 52, I’m alive, I’m alive.”

Within a few hours of communication with O’Grady, the Marines aboard the USS Kearsarge LHD -3 in the Adriatic Sea were given the order to execute the rescue mission. Kearsarge was the lead amphibious assault ship carrying the command element 24th Marine Expeditionary Unit (MEU), as well as it’s aviation assets. Most important, the bulk of it’s ground combat element came from 3rd Bn, 8th Marines  (BLT 3/8). As part of 3/8’s presence on the Kearsarge were the members of Weapons Company which included the designated “TRAP” platoon. 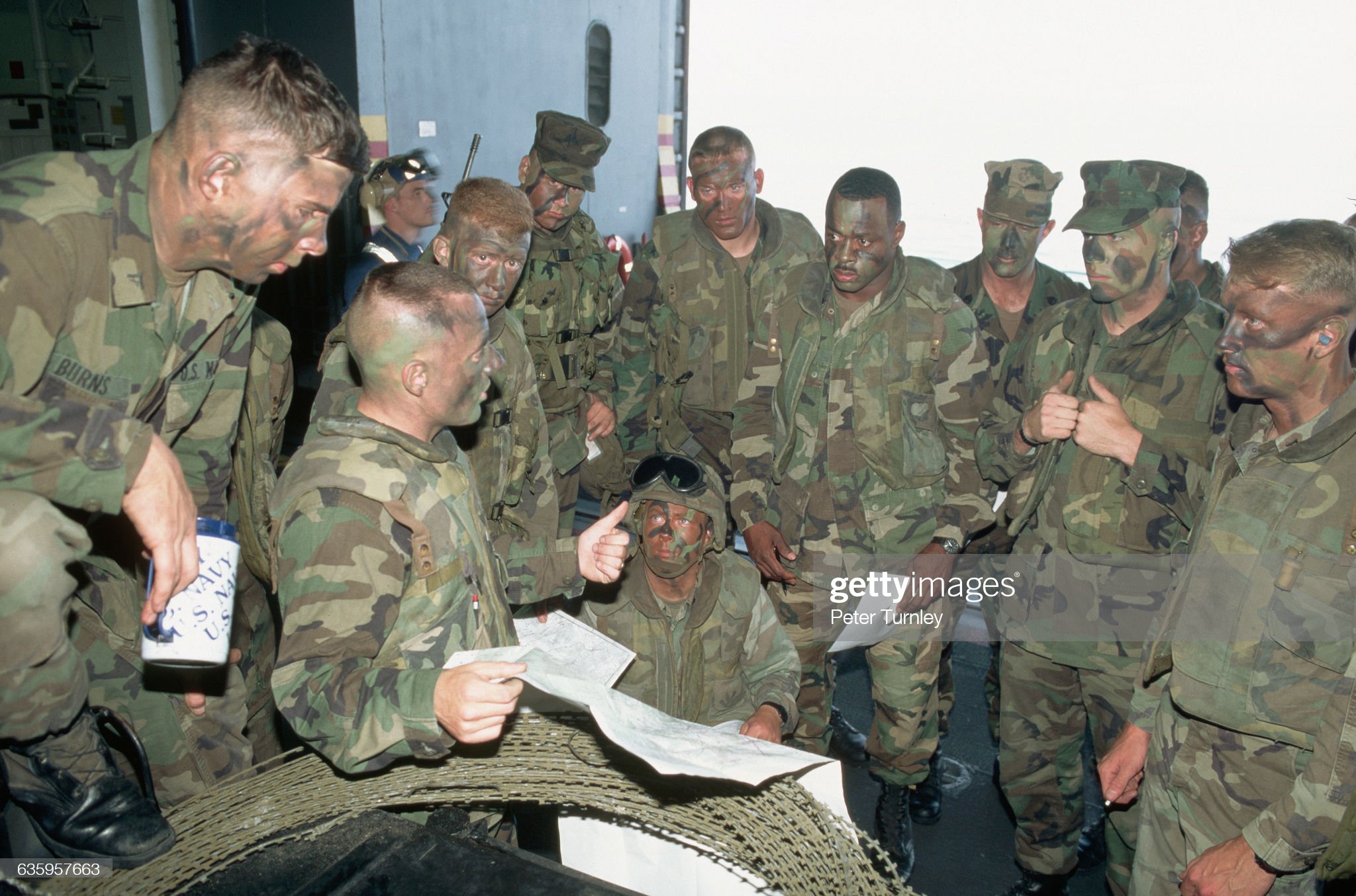 Numerous assets from the US Air Force and Navy were immediately deployed, prepared for any contingency. The 51 Marines from 3/8 traveled by two CH- 53 Sea Stallion Helicopters, two AH1W Super Cobra attack helicopters ,as well as two AV8B Harrier jets. As the sun was rising over Bosnia, the Marines were making a mad dash from the flight deck of the Kearsarge, over the Adriatic, and into the hostile Serb controlled territory.

Armed with his service pistol, O’Grady was quickly ushered onto one of the CH-53’s. In less than 7 minutes, all Marines were accounted for, including O’Grady. Once airborne, it was a frantic flight to avoid the Serbian surface-to-air batteries. A few missiles were fired at the Marines while they deployed countermeasures and successfully evaded the launches.

After roughly 30 minutes in the air, the lead CH-53 gave the call to Kearsarge: “FEET WET,” meaning the Marines were safely over the Adriatic. One of the 3/8 Staff Sergeants recalled the gleam of white teeth from the smiles of the Marines fully covered in camouflage. Fifteen minutes later, Capt. O’Grady and the Marines were aboard the Kearsarge. O’Grady was quickly escorted by Naval intelligence officers while the Marines returned to their day-to-day at sea.

At the time of the incident, the rescue mission received tremendous coverage worldwide, and rightfully so. Everything worked! The training invested in O’Grady and other pilots proved effective. The communication and coordination between all of the US and NATO forces in theater worked.

For the Marines of 3/8 and the 24th MEU, there was more than that. There was a affirmation that nobody is ever left behind.  TRAP missions remain one of the core missions for the Marine Corps’ infantry and the aviation units that support them.

Captain O’Grady left active duty soon after his rescue. On many occasions, he emotionally expressed his gratitude to the Marines who rescued him and the members of his squadron who never gave up on finding him. O’Grady appeared intermittently in politics over the next several years, including a run for statewide office in 2012. There have been many reenactments of his rescue in movies and television. Not long after the rescue, O’Grady and several of the Marines were interviewed on ABC’s 20/20. Among them was the MEU Commander, Marine Col. Martin Berndt, who, when asked why does everyone feel so good about this, he answered “it was a mission to save life.”

Check back to AmericanGrit.com to read more stories like this!