Modern Hard Corps Stories is a monthly segment here at American Grit. We will take you through the modern history since the end of the Vietnam War to the present. Consequently, covering some of the greatest units that make up the United States Marine Corps.

In part 2 of our monthly series, we go to the land that God forgot, 29 Palms, California. The Stumps is home to the 7th Marine Regiment and this month’s Modern Hard Corps Story: 1st Bn. 7th Marines (1/7).

Now, when it comes to a history that strikes fear into the heart of the enemy, 1/7 certainly has bragging rights. In the second world war, 1/7 was part of some of the deadliest battles like Guadalcanal and Peleliu. A reputation tested and upheld at the Chosin Reservoir in 1950 and yet again in Vietnam in many key operations such as Operation Starlite.

When it comes to a roster that screams “Get Some,” 1/7 has it covered. Commanded by “Chesty” Puller during the second world war and James “Mad Dog” Mattis during the Gulf War.

Gunnery Sgt John Basilone was awarded the Medal of Honor for his actions on Guadalcanal with 1/7.

The proud hard corps history of 1/7 did not end in Vietnam.

During the 1980’s, 1/7 was deployed regularly as part of the Unit Deployment Program (UDP) on Okinawa. During this time, this they also became part of the 1st Marine Division’s air contingency force. Thus, able to rapid deploy anywhere in the world by air. “The First Team” as it became known in Korea had been without conflict for over a decade.

Iraq invaded Kuwait on August 2nd 1990. 1/7 was one of the first Marine ground combat unit to arrive in Saudi Arabia and establish a defensive positions against any potential Iraqi action.

As other units arrived, including several other Marine infantry units, Operation Desert Shield was in effect.

By the end of 1990, there was no end in sight for Iraq’s occupation of Kuwait and the planning for offensive operations were in full effect.

As the air phase of Operation Desert Storm began in mid January 1991, Marines on the ground were inching towards the Kuwaiti border, and preparing for the breach into Kuwait that would come 6 weeks later.

As Task Force Ripper blitzed into Kuwait and towards Kuwait City, 1/7 was it’s spearhead. 1/7 absolutely obliterated any Iraqi counter measures, and were among the first to arrive at Kuwait City. Within a month, after the liberation of Kuwait by US and Coalition forces, 1/7 returned home to 29 Palms, CA.

With less than 2 months left in his term, President George H.W. Bush had not taken his eye off potential problems around the globe. With a brutal civil war taking place in the East African nation of Somalia, President Bush decided to “send in the Marines.”

2nd Bn, 9th Marines (2/9) which was part of 5th Marines, was afloat as BLT 2/9 with the 15th Marine Expeditionary Unit (MEU). On December 9th 1992, 2/9 would make a widely publicized landing from the sea, and would conduct a series of missions in Somalia over the next two months. Alongside 2/9 was 1/7. 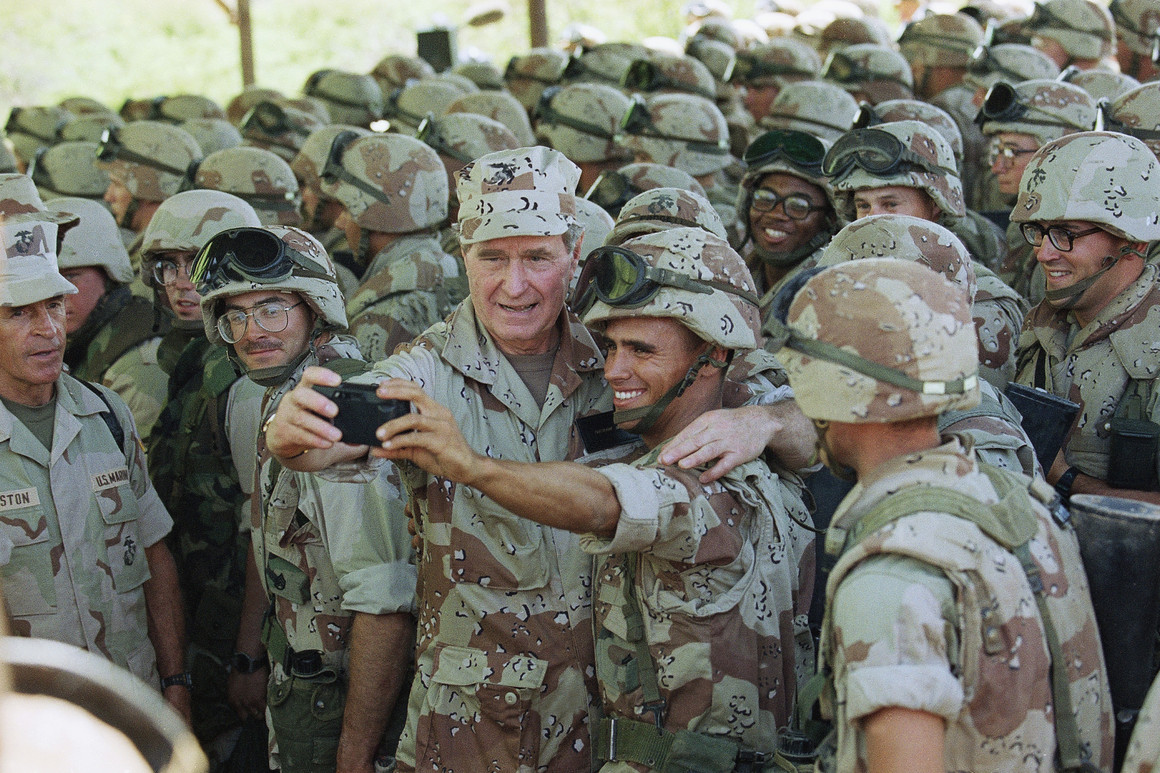 PRESIDENT BUSH WITH MARINES IN SOMALIA JUST BEFORE LEAVING OFFICE

1/7 was deployed on Okinawa, and designated as the “Air Contingency Battalion” in December 1992. As 2/9 was making it’s amphibious landings in Somalia, 1/7 was loading up to deploy by air.

1/7 was circling the skies above war torn Mogadishu, Somalia in a chartered civilian 747 as 2/9 secured the airport. On December 11th 1992, 1/7 was on the ground in Mogadishu. 1/7 would conduct several missions in Somalia before returning home to 29 Palms in late April 1993.

The next decade would be a return to routine and rotation for 1/7.

When the US made it’s move into Iraq in March 2003, 1/7 was again at the forefront. Now the commanding general of the hard as nails 1st Marine Division, Maj. General James Mattis was back in the desert. Now, leading the 1st Marine Division’s thrust from Kuwait into Iraq and ultimately Baghdad.

The oil pumping and control station, located in Az-Zubayr, had control of over half of Iraq’s oil supply. During Operation Desert Storm in 1991, the Iraqis attempted to sabotage Kuwait’s oil supply. There was strong reason to believe Iraq would do the same within it’s own borders. The compromising of the site would result in huge economic ramifications that would force multiply the destabilization that would follow in Iraq.

Operation Crown Jewel was the mission the seize control of the station before any sabotage by the Iraqis. The operation was a success, and 1/7 would arguably fire the first shots of the war. 1/7 would then rejoin RCT-7 and participate in some of the most violent events leading into Baghdad. In late April 2003, 1/7 moved from Baghdad to Najaf and would finally return home in October 2003.

MARINES OF 1/7 OUTSIDE BAGHDAD

1/7 would deploy again to Iraq on 4 separate deployments until the “draw-down” of US forces in 2010.

1/7 made it’s first deployment to  Afghanistan in March 2012, deploying to the the highly contested area of Sangin in the Helmand province. The First Team was a key player in fighting the insurgency in the region and worked heavily alongside British forces. After 7 months, 1/7 returned to 29 Palms but would be back again in March 2014 to bring the pain.

1/7 continues to call 29 Palms, CA, home and continues to train hard and be at the ready. In addition to it’s UDP rotation, 1/7 has also been the ground combat element of the 31st MEU. Additionally, 1/7 is also in rotation as a rapid response force.

The First Team remains always ready and is a tough hardworking battalion. No matter where duty calls, 1st Bn 7th Marines will continue to it’s proud legacy for many years to come. Hard Corps.