Modern Hard Corps Stories is a monthly segment here at American Grit. We will take you through the modern history since the end of the Vietnam War to the present. Consequently, covering some of the greatest units that make up the United States Marine Corps.

We are at Camp Lejeune NC, home of the 2nd Marine Division and some of the Corp’s infantry greats. This month’s Modern Hard Corps Story: 3rd Bn. 6th Marines (3/6).

All Marines enjoy the tag “Devil Dog”, but only select group of units are the source of this honor.  During World War 1, at the battle of Belleau Wood France, the 5th and 6th Marine Regiments were said to have fought the Germans like dogs from hell.

“Teufelhunden” is the loose German translation of Devil Dog, and 3/6 is the standard bearer of this tag. 3/6, along with the battalions of 6th Marines and  5th Marines, is one of the few to rate the French Fouragerre.

If the 2nd Marine Division had designated hitters through the 1980’s to the present, 3/6 would rank high on the roster. With few exceptions, 3/6 has been part of almost every conflict that the Marine Corps has been involved in over the past 4 decades. During the 1980’s 3/6 deployed to Panama as part of counterinsurgency operations and jungle warfare training.

3/6 along with elements of 2nd Light Armored Infantry Bn. (now LAR) and elements of Fleet Anti-Terrorism Company (FAST) were a key strategy in the overall operation. 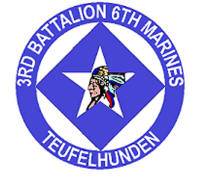 The Liberation of Kuwait

February 24th 1991,  3/6 blitzed into Kuwait. A key element the 6th Marines Task Force, 3/6 experienced significant combat operations all the way to the outskirts of Kuwait City. 3/6 remained in Kuwait for several weeks after the cease fire before returning to “Camp 15” in Saudi Arabia. 3/6 was back at Camp Lejeune, NC by late April 1991.

One of a Kind

When US and NATO forces began patrolling the skies over Bosnia in 1992, concerns grew over the ability to launch Tactical Recovery of Aircraft and Personnel (TRAP). 3/6 made history when it deployed a stand alone reinforced company aboard a US Navy aircraft carrier. Kilo Company 3/6 deployed on the USS Theodore Roosevelt as Special Purpose TRAP unit. The mission not only set the tone for future TRAP operations but also “company” size deployments.

Through rest of the 1990’s, 3/6 would be involved in operations in Haiti and Somalia.

In the aftermath of the terrorist attacks on 9/11/2001, 3/6 was quickly called to action, and Initially ordered to New York City,  but 3/6 was quickly diverted and sailed rapidly towards Afghanistan

In November 2001, 3/6 arrived on station in Pakistan. Along with special forces from both the US and Pakistan, 3/6 was able to insert into Kandahar Afghanistan. 3/6 along with Camp Pendleton based 1st Bn. 1st Marines (1/1) were the first Marines to bring the fight to the Taliban and Al- Qaeda.

3/6 seized control Kandahar Airfield and also provided security for CIA operatives. 3/6 played a role in the initial detaining of John Walker Lindh, an American traitor who had joined the Taliban and was captured while fighting against US forces.

The unit would later assume the role aof “Anti-Terrorism” battalion. They relieved 3d Bn. 8th Marines (3/8) from safeguarding the US Embassy in Kabul, Afghanistan.

Deploying  to Iraq in 2005, 3/6 conducted counterinsurgency operations in the highly contested Al- Anbar province. During the same deployment, 3/6 spearheaded massive urban combat operations in the cities of Husaybah and Karabilah. These operations were among the biggest in the Iraq conflict, and included the brutal Operation Steel Curtain.

In January 2010, 3/6 was back in Afghanistan. This time in the notorious Helmand Province, 3/6 would be a key ground combat element of Operation Moshtarak.

Also known as the battle for Marjah, Operation Moshtarak was multi national operation against the Taliban and it’s strongholds in Marjah and throughout Helmand. The US and UK were the primary forces but also joined by others including the Afghan National Army (ANA).

After and 8 month deployment, 3/6 returned to North Carolina, but within 10 months was back in Marjah.

The fight against ISIS and 3/6 Today

While deployed with the 24th MEU in 2017, elements of 3/6 conducted operations in Syria against ISIS. This was under the umbrella of Operation Inherent Resolve.

3/6 is currently deployed, this time through a new concept of operation. With the Commandant’s push to move the Marine Corps to smaller, faster, and more lethal operations,; 3/6 is disbursed in a number of locations.

To say the history of 3/6 is badass would be an understatement. As the standard bearer of the tag “Teufelhunden”, 3/6 continues to not only live up to it’s proud history but also to continue to write new chapters.